The History of the First Xbox Console

The first Xbox console had a long and difficult journey. But after 20 years, the brand is celebrating its 20th anniversary as a titan of the gaming industry. And here’s its path starting from the 2000s and leading up to 2022.

The original Xbox was Microsoft’s first step into the market of gaming consoles. While they had developed games before releasing the first Xbox, it was the tech giant’s first time releasing a gaming platform. On the other hand, Sony had already been conquering the market with its PlayStation 2. And Nintendo was getting a louder voice with its GameCube.

Worrying about video game consoles taking over PCs, Microsoft finally took its first step with the original Xbox. While the process was filled with doubts, the software giant ended up selling more than 24 million units after four years of the console’s launch. And now, after two decades, Xbox is now one of the most powerful brands with the acquisition of numerous studios and massive companies like Activision Blizzard.

And of course, the process includes many triumphs and great tales alongside failures and setbacks. Now, let’s dive into the story of the original Xbox, the gaming console that started it all for the brand we know today.

Windows released the original Xbox in 2001

Microsoft announced its first entry into the video game console market in March 2000. Though the idea of developing a gaming console was pitched to Bill Gates back in 1998.

With Sony’s growing power in the console market, Microsoft wanted to come up with a console that could harness the power of a PC. Before actually getting into the console business, the tech colossus had already released games like Age of Mythology, Age of Empires, and Microsoft Flight Simulator.

The brain team behind the project came up with many names. Even though they decided on the name Xbox with massive doubts, the initial idea was actually DirectX Box. Fortunately, they agreed on a shortened version and went with the current name. Here are some other names that they came up with during the development process:

Two years after the first meetings, Bill Gates announced Microsoft’s first-ever home video game console in 2000. And a year after that, we finally laid eyes on the final design of the original console.

Bill Gates and Dwayne “The Rock” Johnson presented the design of the console at the Consumer Electronics Expo. Alongside presenting the console’s design, Gates also announced the release date of the company’s first foray into the gaming console territory.

After months of the showcase in the expo, the console that started it all; the original Xbox, made its launch in November 2001.

In two years after its initial debut, Xbox made its way to North America, Australia, Europe, and finally Japan in 2002. As the powerful consoles in the sixth generation, Xbox also represented the American existence in the market as well. Before Microsoft’s first entry, the two competitors in the industry were PlayStation 2 from Sony and GameCube from Nintendo.

The original Xbox came with two different controllers. Due to its hefty size, the first controller design was called The Duke. 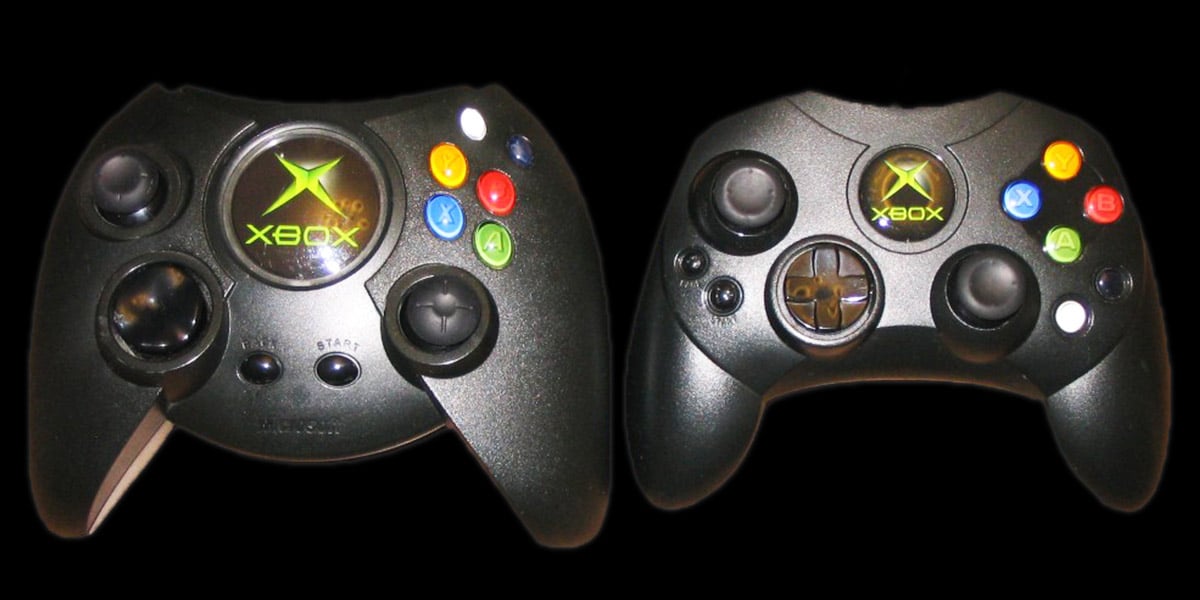 While Microsoft wanted to go with a more subtle design, they could not get an agreement with the company that worked on DualShock. The company did release a smaller controller for Japanese auditions and called it Controller S.

After the popular demand focusing on Controller S, Microsoft replaced the initial design and started offering the console with the new design. Though the production of the Duke was not halted completely and the controller remained on the market for some time. 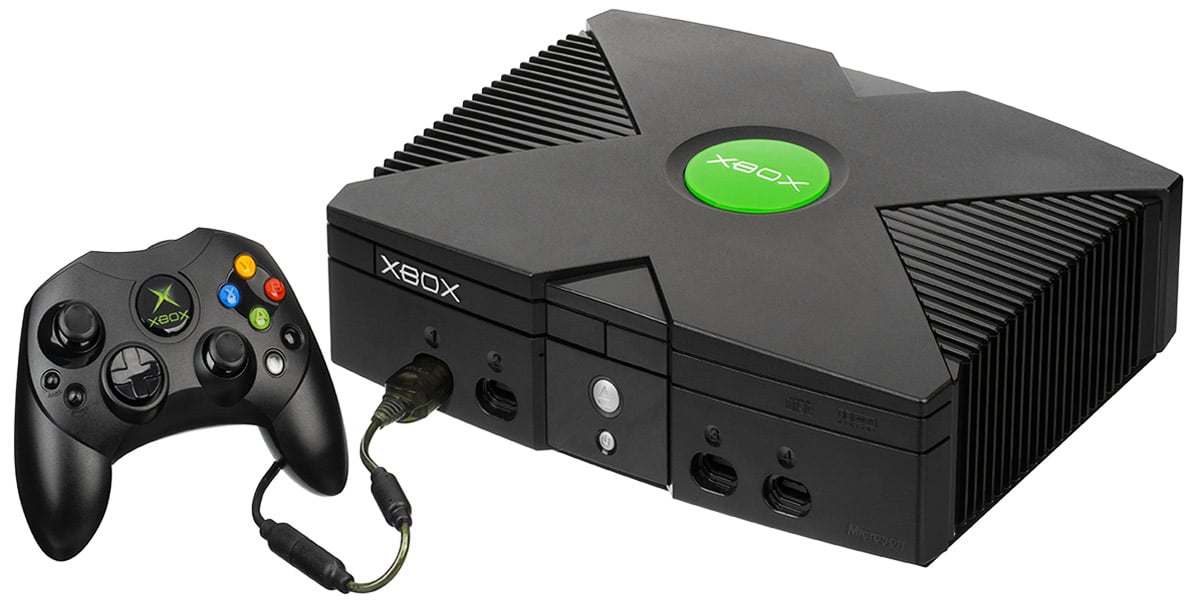 While there were only two months before the year ended, the original Xbox sold more than 1.5 million units. It outsold Nintendo’s Gamecube and Sega’s Dreamcast.

The success behind these numbers came from the smash-hit FPS game Halo: Combat Evolved. Bungie’s sci-fi action game did not only change the fate of shooter games in consoles, but it also boosted the sales of the original Xbox. By the end of 2006, Xbox sold more than 24 million units worldwide. And the critically acclaimed Halo: Combat Evolved became one of the most successful shooter games.

The original Xbox was the most powerful video game console when it launched. Thanks to Microsoft‘s expertise in hardware, Xbox was technically better than its rival, PlayStation 2. 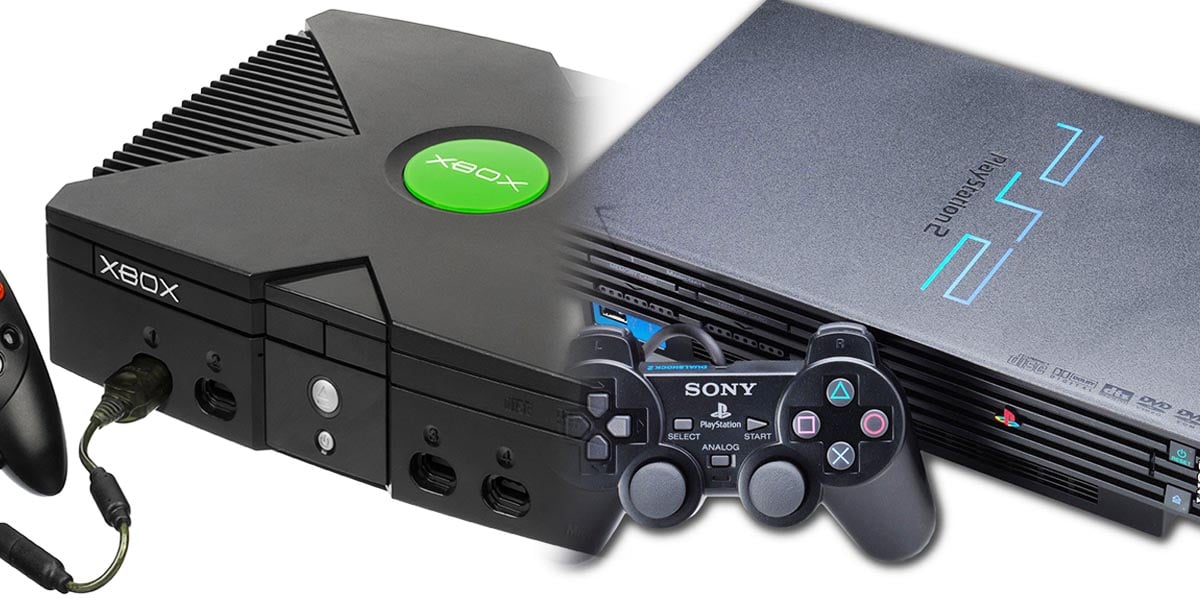 The first generation Xbox cost Microsoft a whopping $4 to $6 billion dollars before it was discontinued in North America in 2009. Microsoft halted its sales in Japan even before that. Because the console’s game catalog was not suitable for Japanese audiences. While Microsoft planned to ship at least 5 million consoles to Japan, the console could only sell 472,992 units in the country.

Microsoft announced Xbox 360 on May 12, 2005, and released the next-generation video game consoles a couple of months later. While Xbox 360 made its debut in November 2005, the production of the original Xbox console went on for years. The software colossus had discontinued shipping to Japan in 2006 and the EU in 2007 before finally stopping it altogether in 2009.

The retail price of the console was $300 but it cost Microsoft $425 to manufacture a single unit. So the original Xbox actually caused a massive financial loss for Microsoft. That being said, with the power of Xbox Live, the video game console became a solid competitor in the market. Even though Microsoft lost billions of dollars because of it, the original Xbox did bring a legend into life. It also provided a foundation for its successor to rise.

The king is dead, long live the king.

Microsoft’s second foray into the gaming console market was Xbox 360. The successor to the original Xbox was the company’s entry into the seventh generation. As a competitor to Sony PlayStation 3 and Nintendo Wii, Xbox 360 launched on November 22, 2005, exactly 4 years and 7 days after the launch of its predecessor. 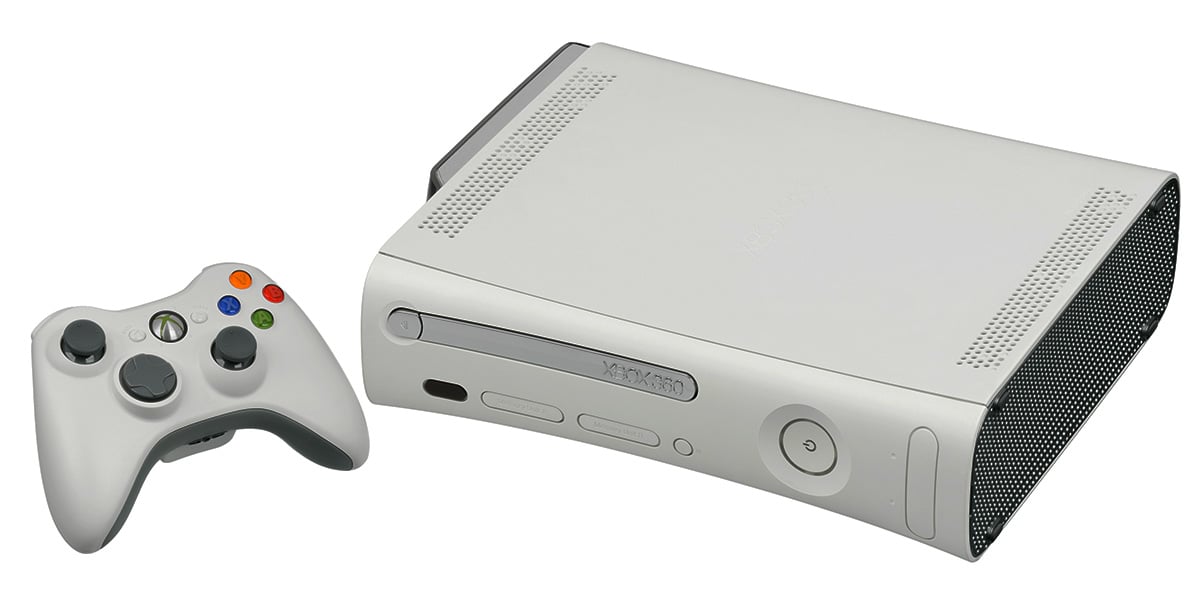 Xbox 360 upgraded the original Xbox in many aspects. But most players preferred using the predecessor even after the second console made its launch. Xbox 360, on the other hand, expanded the reach of Xbox Live with various updates and offered a content-rich social platform for its users. From multimedia features to steaming applications, Xbox Live was the main booster of Microsoft’s console.

Xbıx 360 became the sixth-highest-selling gaming console. But it did not come without its problems. In the early stages after its launch, Microsoft could not ship enough units to the market. After they managed to maintain a stable shipping process, the console was now famous for its Red Ring of Death.

Xbox 360 and its technical issues

Xbox 360 came with various problems like overheating, bricking, and disk-scratching. Though the most known issue with the console was the Red Ring of Death. Coined by the users, RROD rendered the console unusable, similar to the infamous blue screen of Windows. When the power button is surrounded by three red lights, users would understand that the Red Ring of Death finally found their console as well. 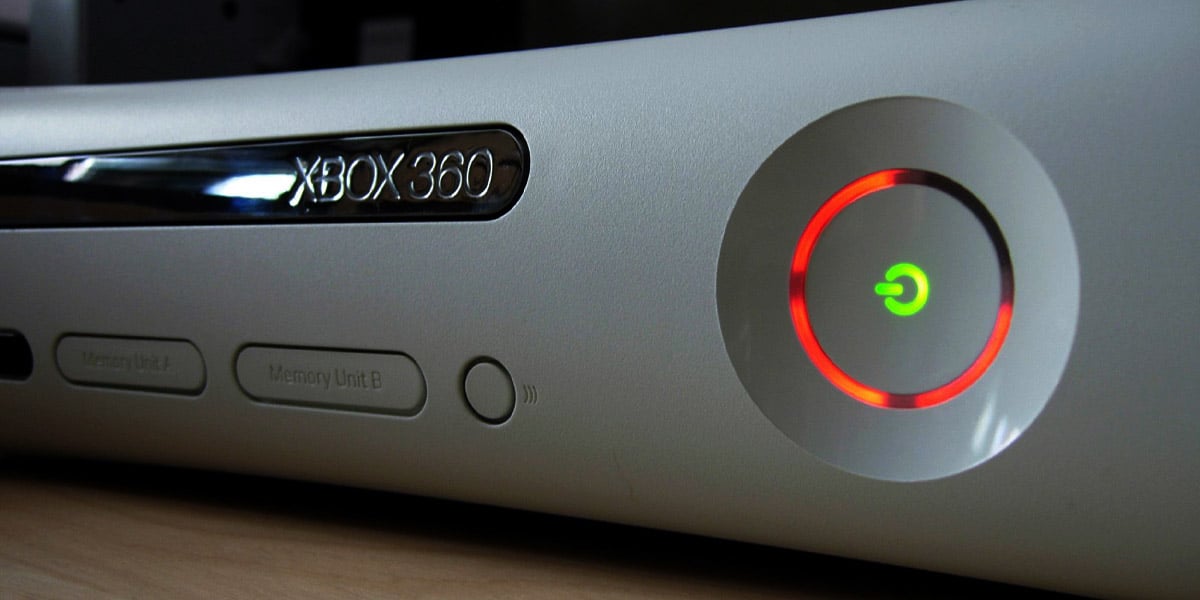 While some people could fix the error by plugging into it to another outlet, most users ended up returning their Xbox 360. This whole process cost Microsoft a whopping $1 billion dollars. The tech titan had already been selling the console less than its manufacturing cost. With the fixing cost included, Microsoft started getting hit per unit, just like in the original Xbox.

The company then announced that the customers who experienced similar problems would be covered with a three-year warranty.

While it was famous for its dreaded problems, Xbox 360 sold more than 84 million units around the world. PlayStation 3, on the other hand, managed to sell 87 million units worldwide. The three million unit gap was nothing for Microsoft. Because they made their product the sixth-highest selling video game console ever.

Xbox 360 stayed in production for a decade until Microsoft discontinued the console six years ago. From 2005 to 2016, the company released various editions of its product. With constant support to Live, 360 became the most successful installment among Microsoft’s other consoles. 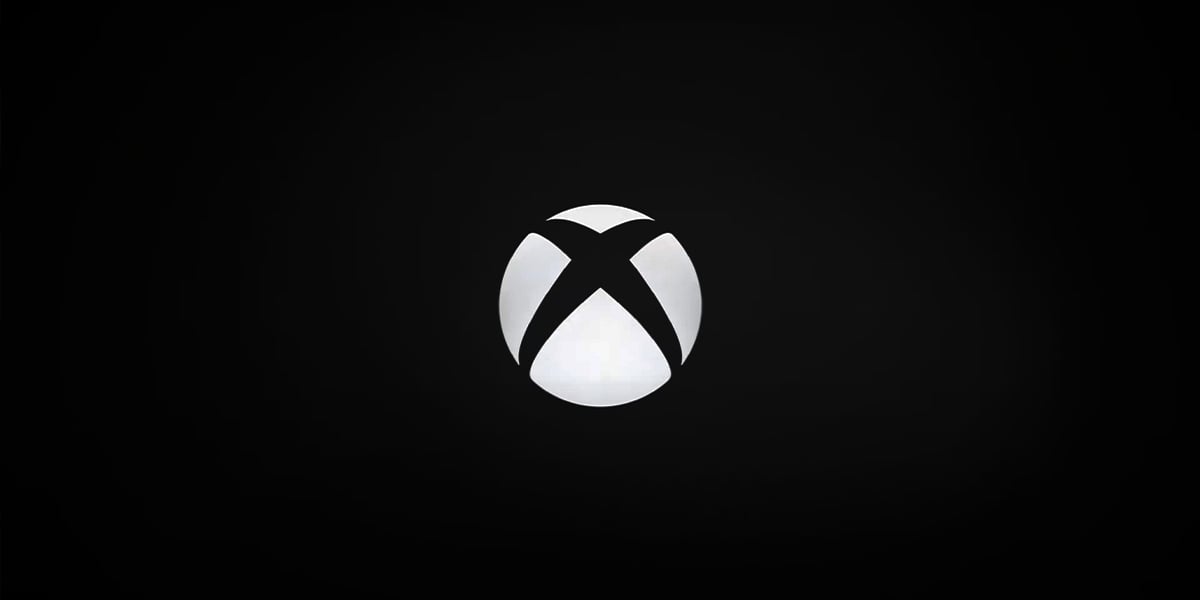 The estimated numbers show that Xbox One sold at least 50 million worldwide. While the next-generation of gaming consoles, Series X/S now sit around 12 million.

The original console and its successor offered a foundation for the Xbox brand to evolve and become what it is today. These two consoles offered the best memories and experiences in the world of gaming. After 20 years, their predecessors aspire to do the same as they expand their reach and tell the story of gaming.

FromSoftware studio released Elden Ring on February 25th, 2022. Since that date, the game has been gaining popularity.…
byOmer Kaan Ayvaz
No comments
%d bloggers like this: