Dungeon Escape: Console Edition is on Xbox One and Xbox Series X/S now to take you to the good old arcade games years. It spent a few years on PC and finally is available to play on Xbox consoles.

The game takes you to the good old arcade years with the bittersweet taste of nostalgia. This 2D platformer is challenging in every aspect it has. Let’s take a closer look at it.

“You’re trapped in a dungeon filled with fierce enemies and dangerous traps. You have a small chance to keep living. The goal is to try to escape but it is not that easy. You need to do some wise moves and show the ability to find a way out. Exploring the chambers is quite deadly but also challenging. You need to find the keys to unlock doors while dealing with the enemies. Another thing is that the difficulty will keep increasing as you go further!”

Get Ready to Die Over and Over Again

Dungeon Escape: Console Edition is basically all about your patience and planning skills. There are traps all over and you need to be aware of them. For example, you have to be careful about the sawblades. Or you just die, that’s it.

The great part is that you have the chance to try as many times as you want. You can always retry to overcome the challenges in various difficulties. If you learn from your mistakes, your survival chance might increase too.

The game’s graphics are simple, smooth, and enjoyable. The soundtrack is a success by itself because you can’t stop yourself moving with the tune. If we want to explain the game in a couple of words, it would be minimalistic and fun for sure.

Another gore-ish yet amusing feature is that you can blast your enemies by jumping on their heads. You can always choose to get away from them too but blasting is one of the basic entertainment factors of the game.

What do you think about Dungeon Escape: Console Edition on Xbox consoles? Will you take a look at it? Let us know what you think in the comments. 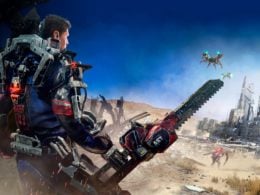 The Surge or The Surge 2 – Which is Better?

Should you The Surge before The Surge 2? Which game in the series is better and which one…
byKerem Dogan Karakoc