Nerf Legends is a First Person Shooter game for Xbox consoles that lets you use Nerf blasters to create a science-fiction future. It retails for $49.99.

As a hopeful contestant, you enter the Nerf Trials.  In this gauntlet-style competition, you are armed with blasters that have been enhanced to create more exciting gameplay.  Don’t think your blaster has enough power?  No worries, you can continuously level them up.

Your goal is to complete the winding courses and defeat puzzles and Nerf Masters.

This story is about your ability to prove your skills with the blasters. Along your journey, you’ll encounter intricate courses where you will have to defeat robots and solve all kinds of puzzles to finally reach the mysterious Grand Masters.  The Grand Masters will be your final competition.  Once you have conquered the Grand Masters, you will be crowned a Nerf Legend.

As anyone who has ever played with a Nerf blaster knows, this can eventually lead to your floor being covered in foam darts. This was a great game idea by Nerf Legends. Foam darts will eventually scatter on the ground and you need to pick them up fast to replenish your ammo. This allows you to reuse the ammo of other players, allowing for unique and creative strategies.

Nerf legends looked to other video games for inspiration, that is in addition to playing with Nerf blasters.  While no single game inspired our work in Nerf Legends directly, the FPS genre has many excellent games that we can reflect on.

Nerf Legends has many unique gameplay mechanics that you won’t find in other FPS games. One of the early prototyping phases saw the possibility to add a trampoline-like bounce pad.

It was a popular idea that everyone loved. Nerf Legends played with this mechanism quite a lot. The bounce pads can be used to jump to higher platforms or to access another area of a level.  Sometimes they can also be used to solve puzzles.

Imagine hopping through the air to hit targets or opponents.  Or using a jump pad to jump into the middle of the action.  We created accelerators from this gameplay.  The accelerators propel you into the level like a cannonball, and it changed how we think about traversal. These mechanics inspired many of our level designs.

The blasters are, in many ways, the star of the game. However, there is no set template for how Nerf should look or feel. This allows for a lot of creativity and freedom to take the game in new directions.

Nerf Legends lets you scale castle walls and run through futuristic Viking ship-filled bays, jump between jungle mountains cliffs, and zip through huge spaceports. The levels are varied and not taken too seriously. It was all about having fun with blasters and creating levels that brought joy to everyone. 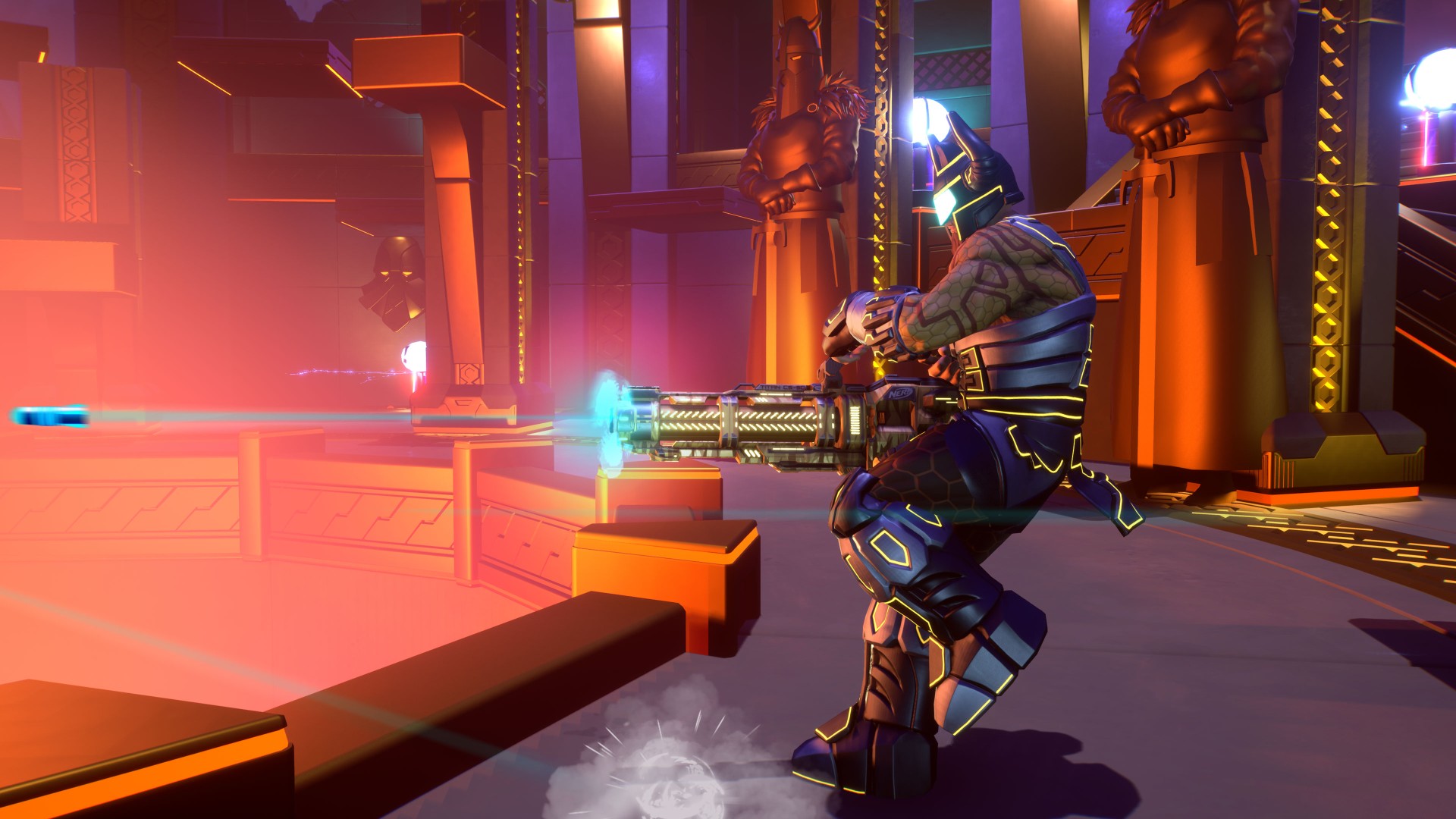 Nerf legends offer a complete single-player campaign. However, there are many online multiplayer game modes.

Solo Nerf Out and Team Nerf Out are the deathmatch or team deathmatch modes. However, there is no death. Once they are defeated, players in the game get tagged out.

Nerf Siege is a king of the hill style game

Golden Dart is a variation on capture the flag. However, it comes with an interesting twist. This is a team-play mode in which players tag out others to score. However, the team scores if they capture and use the golden dart to blast at targets that move around the map. If the dart is fired, the player who carries it loses it. Also, they are tagged out so teammates need to try to protect them.

Nerf blasters and Nerf brand are great toys to use in a videogame. Nerf Legends tried to be true to Nerf’s core values while amplifying the fun of playing with blasters in real life. They also broke boundaries to create an enhanced Nerf experience that is impossible in real-life.