The first challenge one may face in Code Vein is creating your character. Just like the ones seen in God Eater 3 and Soul Caliber 6. There are hundreds of options to try and many color shades to be used up to the hair, eyes, and even eye brows. Each and every part of your face and body has its own advanced adjustments, and there are many additional supplements such as tattoos and masks to allow you to make the anime character of your dreams.

Shortly after that, you will be thrown into a catastrophic world filled with ferocious monsters and vampires who are always looking for a steady supply of human blood. As an amnesic vampire revenant yourself, you begin to learn how a thirst for blood is devastating for your kind, and starving for it can cause a revenant to turn into a lost monster, losing their personality and past memories in the process.

It does not end here sadly, because even after their deaths they come back to life again as vampires without memories, just crammed into this perpetual cycle of life, death and pain with no end in sight. Bit by bit you start to learn about the reasons for the diminishing blood supplies, cooperate with other surviving characters, then play a more active role into the grand scheme of things and put an end to this eternal cycle.

There are many things at stake, and multiple conflicting feelings within each character as you will find out from exploring their memories and past regrets. Moreover, a wealth of lore is prepared to inform you about every weapon, type of revenant, their behaviors and fighting styles. There is a lot to digest but luckily the main story is entirely handed out to you in cutscenes, so need to worry about having to read tons of obscure texts and collect the pieces like the regular Soulsborne formula.

Whatever you want to be

The most relevant parts that we need to talk about in Code Vein are your blood code (build), your gifts (Special abilities), blood veil (armor) and equipment. Your code is interchangeable at any point in the game, and you can get more of them as you continue playing, it acts like a class that determines your states and which weapons you can handle, along with allowing the use of multiple special abilities called gifts.

Each blood code contains one permanent gift that defines its main use, and the rest of the gifts can be imported from other builds or applied depending on the states level allowed by your code. Gifts as any magical abilities cost mana, or in this game “ichor”, but since you are a vampire you need not care as you can suck the life out of anyone and drain the required energy to reuse your abilities at any point, even from boss monsters.

Of course you don’t go out and put your jaw around people’s necks at night, instead your cool metal head jacket (blood veil) acts as your blood transfusion equipment and transforms into many different shapes like thorns, claws and long centipede like blades to do your work for you, and wrap up the deal with some cool anime-esque finishing animations. All of these advantages allow for synchronous use of various gifts without any delay between usage.

There are also five types of weapons distinguished in their shape, damage, movement and weight, and one class of them can contain weapons with completely different shapes and characteristics. The most gratifying thing in this game is that you can change all of that at literally any point in time (even mid-battle), and multiple weapons/veils can already be found in their upgraded form without having to consume any currency or materials.

The Code of Sacrifice

You might be wondering what is the price i have to pay for this near-infinite chance of adaptability. I mean you can probably change around your entire build as soon as you find a new piece of equipment or unlock a gift. That’s why it should be taken into consideration that a lot of gifts does not consume your only mana points, but your health points as well. On the bright side, you don’t have to shoulder it all by yourself.

An AI companion is always beside you during every moment of your journey. There are multiple ones to choose from and while you cannot really control or customize them in any method, you will find out that most of your gifts affect both you and your companion. It’s always two instead of one. Your partner also can help in brining you back to life through sacrificing a great deal of their HP and vice versa.

Sacrifice for the sake of others is a central theme in Code Vein, not just as a gameplay mechanism but also as a major story theme that many plot twists revolve around. There are also certain abilities that can only be activated by partnering with certain characters and not others, so you have to consider whom are you going to take with you when working on your build.

The true face of Code Vein

A first playthrough of Code Vein will take you at least 30 hours to finish, and to be fair it wasn’t as challenging as we hoped it would be. The is mainly due to the reasons we described before, in addition to the slow and simplistic attack animations of the lost monsters, which helped in memorizing their patterns much faster, and also how easy it is to accumulate points and upgrade your character without any reserves.

Players looking for an extra challenge should give some time for the new enhance difficulty, only unlocked after you beat the game once, or the extra DLC bosses, which were a real treat. We had to create specific builds to be able to take down at least one of them, though we are still sad about how they nerfed our one hit kill sword technique. It still does a ton of damage and we was really happy about how we were able to work it around specifically for a truly challenging boss both in size and viciousness.

There are three endings to unlock, all of them achievable in the same playthrough, and some extra chalice dungeon like locations for more investment in the game’s systems, however these additional challenges do not present any new monster types or exclusive content, instead the game reutilizes the original boss monsters with higher states and some new movements, or allows you to fight two bosses at the same time instead of one.

The difficulty level should not prevent you from appreciating the visual quality and the aesthetic sense in designing some of the locations in game. There are many places to explore such as deserts, snowy mountains, burning lands and beautiful castles reminiscent of Anor Londo from the dark souls franchise. Though our only criticism might be that many of these places lack the depth found in their predecessors, or some artistic lore manifestations like paintings, status, or any other object with an interesting history worth exploring and coming back to.

Code Vein is more interested in telling the story of the world and the characters than actually representing this story throughout the locations you visit. Only the boss monsters have actual ties to the places they are found in, and even the music accompanying their fights is much better than the soundtracks you hear between levels. The Japanese rock band VAMPS also did a great job in conveying the tragic psychological state of each character as they live in this never ending hell.

Xbox Series X is the latest generation console. It comes up with powerful processors to improve your gaming…
byOmer Kaan Ayvaz
No comments 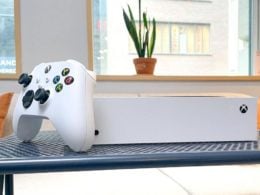 How To Set Up Your Xbox Series S – Full Walkthrough