We get used to seeing a lot of games added to Xbox game pass. However, this month is a bit different than the other months. Xbox game pass subscribers can play eight different games this month. A number of the games are less than other months. A lot of people make compliments about this situation on Xbox forums. Do not worry. Xbox Game Pass February games will be enough for you. They will provide more than one hundred gaming hours. If you are a strategy games fan, you will be happy this month with the new games. In this month, you can play two legendary strategy games. Also, if you are a sports games fan, the Xbox game pass February games will make you happy this month.

Mass Effect is a science-fiction role-playing action game. Because of its unique features, this game is the ancestor of a variety of games. If you have not played Mass Effect, you missed a lot of things. With an Xbox game pass subscription, you can play the Mass Effect Legendary Edition cloud version on your Mobile phone. It is a great chance to play this legendary game.

This month sports game fans will be happy with new games which came to the Xbox game pass. Madden NFL 22 can be played by Xbox game pass owners via EA play. Also, Madden NFL 22 play will get a lot of bonuses like a %10 discount for all purchases on Madden NFL market. It will be available on February 17. 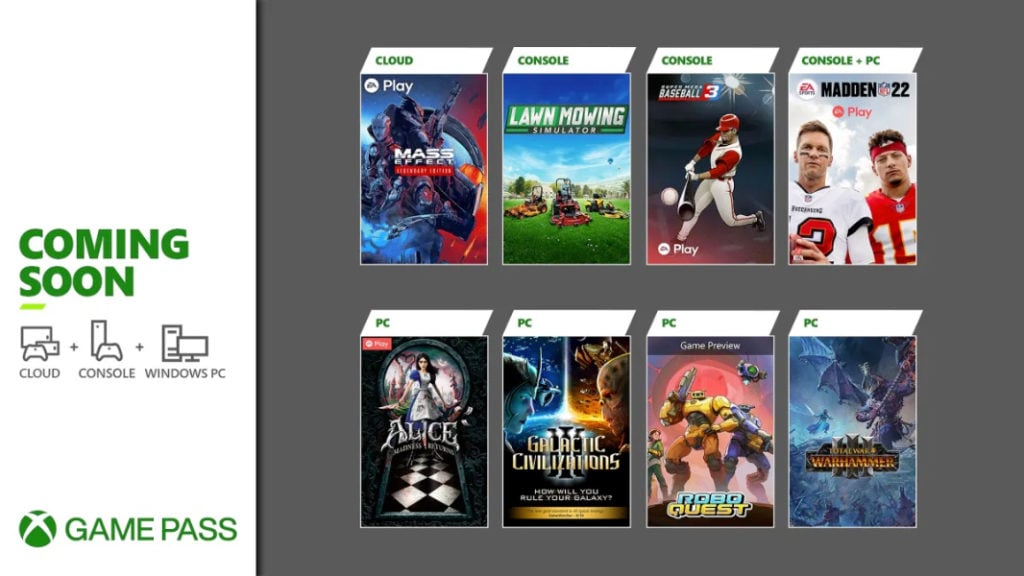 If you are a strategy game fan, you must wait for the Total War III release date. Do you want to try it for free? If your answer is yes, you should consider subscribing to Xbox game pass this month. This month, Xbox game pass owners can play a brand new game with their Xbox game pass subscription. Also, if you consider buying Total War: Warhammer III, it is a great chance to try it before you purchase it. Players can play it on February 17.

The new game additions will start on February 22nd with Roboquest. Unfortunately, Xbox game pass subscribers cannot reach the full version of this game. If you like the game, you need to buy it to finish the game story. Also, Players can play Galatic Civilizations III on February 24th.  Also, Super Mega Baseball 3 can be played by Xbox game pass owners on February 24th via EA Play. The last game of this month is Alice: Madness Return via EA Play.