Season Four, the latest content update for Sea of ​​Thieves, was released on September 23. The update can be downloaded for free with Xbox Game Pass, Xbox Series X/S, Xbox One, PC, and Steam. With the end of the summer, Sea of ​​Thieves also entered a new season. Season Four was presented to gamers with brand new content.

With the new update, you can access new events and seasonal rewards. You can also see the entire Sunken Kingdom in Season Four, with Tall Tales coming in Season Three. There are also unrevealed mysteries and brand-new treasures in this update. Like previous seasons, Season Four has 100 levels based on progression. Here you can win prizes as you pass the levels. Also available is a Loot Pass with premium features that are nowhere else to be found. You can find information about previous seasons here. 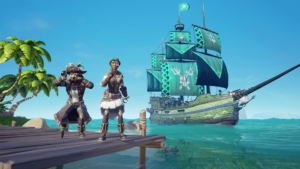 The Sunken Kingdom on Season Four

We first encountered The Sunken Kingdom in the Tall Tales episode of the third season of Sea of ​​Thieves. In Season Four, we have a chance to see the entire kingdom. Various regions of the kingdom can be seen marked on the maps on the ships. In addition, pirates can dive and search for treasures under the sea.

There are six Siren temples in the Sunken Kingdom. These temples have puzzles and mysteries to be solved. Along with these, treasures await adventurers in the deep sea. Players can also find Siren treasures in this section. You can read more about the Sunken Kingdom in Sea of ​​Thieves Season Four here.

The Golden Nile Ship Collection is coming to the Pirate Emporium in Season Four, the latest content update for Sea of ​​Thieves. Players who want to change their appearance can also purchase the Golden Nile Costume and matching weapons. Players can make their rewards more powerful with the Loot Pass. The Jack O’Looter skin, weapons, and ships can also be obtained with the Loot Pass without going to the Pirate Emporium.

You can have more information about the update on the Sea of ​​Thieves site. You can play with Xbox One, Xbox Series X/S, or Windows 10 PC by downloading the update.