The challenges we face in life are not the only source of mental and psychological fatigue especially in our teens, as society can influence our tolerance for these confusing times through stressful expectations, jealous remarks, and blind assumptions that ignore our personal identity, ambitions, and dreams. This is the main theme of today’s game The Artful Escape.

Francis Vendetti is a teenager who struggles on a daily basis as a victim of society’s expectations. His uncle Johnson Vendetti was a legend in playing folk music, and the main interest of their small hometown, but after he passed away, the townspeople kept hoping that Francis will revive his uncle’s brighter days by organizing a memorial for Johnson Vendetti, and forcing him to play the music of his late uncle to prove that he has inherited his talent for music to the same degree.

Francis being talentless is not the issue of our story, as he has enough of it to show the world who he is. The main dilemma is that he is just not into folk music, he does not find himself in it, and when he tries to play the guitar, the tones end up appearing weak and lost. From time to time his eyes light up with visions borrowed from his passion for science fiction stories, and his real dreams of playing rock music and wandering between universes and assuming a completely different and new identity, in other words: his true identity.

That’s why the Artful Escape’s unique and expressive story structure can be digested in a number of ways. There are a lot of obvious hints of magical realism and many strange fantastical objects are considered normal in the eyes of the characters. You can consider it as if everything has truly happened, and that Francis really went on a journey to outer space beyond the stars known to man, or you can interpret it as if it was a symbolic journey of self-discovery that went through his mind and nothing more. Either way, it’s a journey you can’t miss for the world.

The Artful Escape is Immediately Available on PC, Xbox One, Xbox Series X/S, and is playable for free for all Xbox Game Pass subscribers. 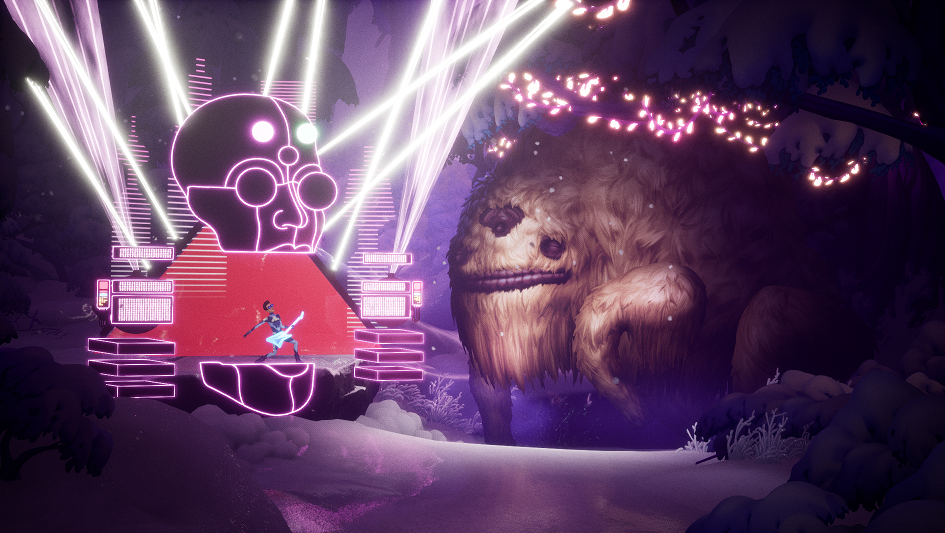 Going on a journey of self discovery is not entirely a fresh concept, but The Artful Escape takes this idea and restructures it into a magical fantasy that delves into the depth of space and through the distant universes. The amalgamation of the bizarre setting and over the top music kept reminding us of how Art and music could be resonant and capable of addressing our innermost feelings and conveying things that cannot be described in words.

Your dreams are just dreams. You don’t know how to hold a guitar without panicking, what you need to wear to a party, what other people want from you, and you don’t even know what you want in the current moment You’re truly living through an existential crisis that everyone at this age must have gone through at least once or twice, but after an eerie encounter with an alien existence in the middle of the night, you discover that your life isn’t limited to just one or two choices.

Through joining an outer space intergalactic band, you are handed a new outfit and a guitar than can unleash a number of incredible beats. You can even try to play with it yourself through a set of simple controls, but mostly throughout the game you will be holding one button while moving and it will be more than enough to unleash all your inner musical desires.

The world interacts with your music in various ways. Light bulbs shine in many different colors, distant stars glow more brighter if you look at them, also exotic flowers and plants keep blooming whenever you walk past them. All music coming out of your guitar mashes really well with the constant heavy rock soundtracks being played during every stage and any moment of your journey. Now you can finally express what you truly desire, and change your inner and outer world with the magic of rock music. 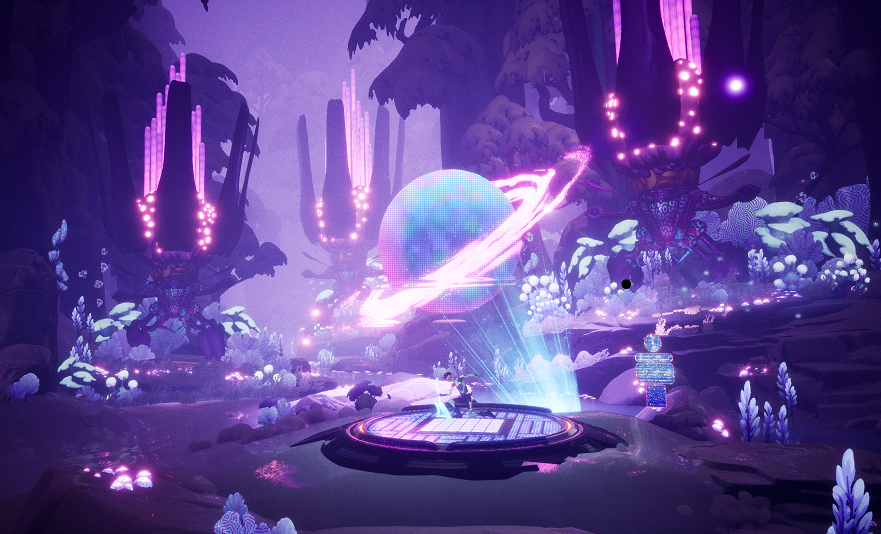 The Artful Escape speaks to the heart, not the mind

Playing through the game is ultimately a no-brainer. It only asks you to feel, and fill up your eyes and ears with dazzling spectacles and harmonious tunes. All you need to do is hold that one button and enjoy walking around the different planets and let your imagination run wild.

Associate all your dreams, ideals and worries with the elements of music and the core of your protagonist’s soul, whom you can influence and choose how he actually pursue his own internal revamp through a few dialogue choices here and there, but above all you will help him discover his true potential and calling, which he himself did not think he had.

Rock music and outstanding visuals are the main appeal of the experience. In every corner you will find many references to real works of art, music and literature. A central character’s backstory is similarly told in the form of a giant hologram exhibition with a narrator blending fantasy and reality together to create a narrative experience like none other.

No two moments are alike in this game, and at no instance I have felt that the game took more or less than the time required of it to say what it wanted to say. The developer is clearly aware of the impact each scene leaves on the player, and crafts simple but resonant words to express what he is trying to convey to the players. It all feels very natural and blends together like an actual musical score written by a real legendary artist – Which it is by the way. The main guitarist and head the development studio is none other than Johnny Galvatron, one of the founding members and lead guitarist of the band The Galvatrons, and he worked together on this game along with many iconic faces in the music industry. 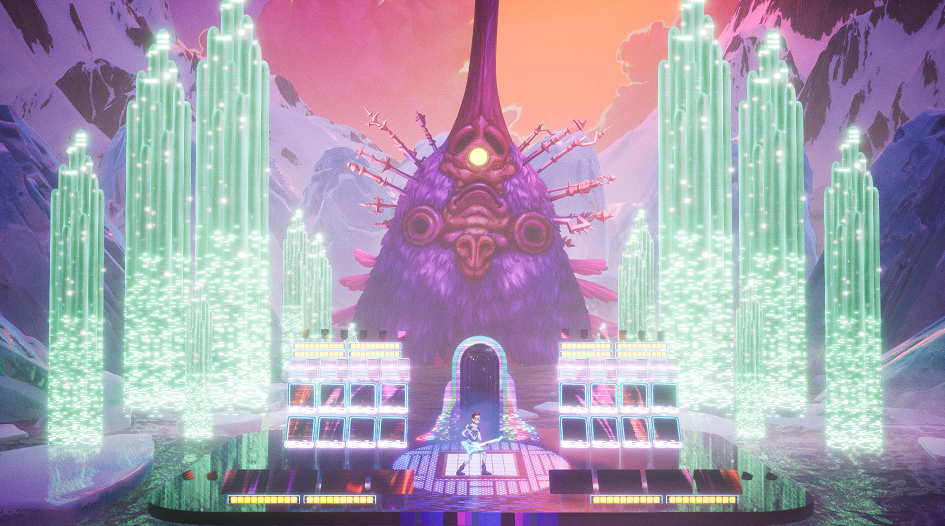 Perhaps the Artful Escape is not a game for everyone, but surely it is able to communicate something meaningful to everyone through its colorful enchanting setting, and its unprecedented interactive gameplay which blends the player’s musical input really well with the original soundtrack and the visual details of anything that catches the player’s eye.

This game is perhaps the most beautiful game we have ever seen in a long time, and it might be considered the most beautiful game of 2021. The Artful Escape is an accurate representation of the potential of the video gaming to transcend itself and delve into other art mediums through the use of complex artistic ascetics similar to the recent indie hit GRIS.

Of course, those who are looking for a bit more complexity in gameplay might leave a bit disappointed, as the game is purely designed around moving the main character while holding a single button for 3-4 hours, and nothing really evolves from the basics that will be discussed in the game’s prologue, but honestly we did not care much about progression or the increasing potential of player input for this particular game.

There are a lot of games out there trying to do new outlandish things or or imitate other sources of inspiration to get creative, however, The Artful Escape is one of the few that actually does creativity pretty well. There is currently no experience quite like the one we’ve had here, so it’s hard to try to compare it to anything else on the scene.

The game isn’t even trying to appeal to the lovers of the rhythm genre, instead its trying to sell its own linear story in a musical art structure that can’t be imitated. I love The Artful Escape for its own sake, and this is something we rarely find in today’s games that are stuck all the time between the legacy of the past and the ambitions of the future, so I am confident that this game is a wonderful and indispensable addition to today’s game scene, and a prime example that the video game industry will always remains vibrant and inspirational for years to come.