One of the first games I ever played growing up was Sonic the hedgehog released in 1991 by the Japanese video game publisher Sega. One of the first games kids play in this new generation is Minecraft which was released 2011 by the Swedish video game publisher Mojang. It’s feels unreal that these two games will be combined into one, and only fitting.

Now, 30 years later, Xbox gives us an incredible trailer for the new Minecraft and Sonic DLC. Get ready to zoom through the world of Sonic and Minecraft in the unforgettable 3D runner that changed the face of video games forever. You take control of the worlds fastest hedgehog now from the Minecraft Marketplace. For $7.99 USD you can access over 25 skins within the Minecraft: Bedrock Edition pack.

What to expect from the Minecraft and Sonic DLC?

In the new Minecraft and Sonic DLC, you can expect to have that authentic Sonic experience in a pixelated world. There are some new features added to the game such as an Infinite runner game mode, where you can and friends can race. In this mode, be prepared to collect rings in procedurally generated zones.

Fans will be excited to find out that they can also play as Knuckles (my personal favorite), Tails, Amy Rose and Shadow. In the last few seconds of the trailer, the evil Dr. Robotnik pops on screen. To celebrate Sonic’s birthday you can join in a special server event that is taking place soon. The Hive will be hosting a two-week server-hub event that features festive suprises and mini games.

Will you be trying this game? Let us know! 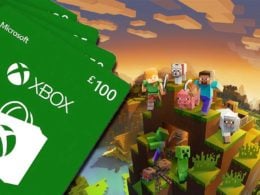 How to redeem Minecraft Gift Cards on Xbox consoles? Here’s your guide on enjoying your presents on Minecraft.…
byKerem Dogan Karakoc
No comments