Here is the full list of all the bosses in Limgrave. We compiled all the optional and essential bosses in the starting area of the Lands Between.

Elden Ring is a massive action RPG filled with numerous bosses, castles, and dungeons. You can easily stumble upon a mysterious area with treasures and of course, a boss fight. But you might want to navigate your way around in this magical land. As the game shows you nothing on its map, you will need to do a lot of exploring to find a place with a boss. While that’s the fun part of Elden Ring, we all need some guidance in Limgrave, the first region in the game. After all, as the Tarnished, we are all Maidenless. And we do need some Runes to level up.

Before moving on with the essential boss fights though, you need a couple of enemies felled to increase your stats. Here are all the bosses in Limgrave, optional and essential.

Every Boss in Limgrave

Limgrave is the first part of our long and difficult journey through the Lands Between. Even though it is the starting area, it has lots of great enemies including a massive dragon. This coastal region actually throws you a boss as soon as you start exploring the open world. Yes, we are talking about the knight in golden armor, the Tree Sentinel.

Soldier of Godrick is the first boss that you will fight in the tutorial area. But don’t worry if you missed it as it does not drop anything.

Tree Sentinel is the first boss you will see as soon as you take your first step into the world. 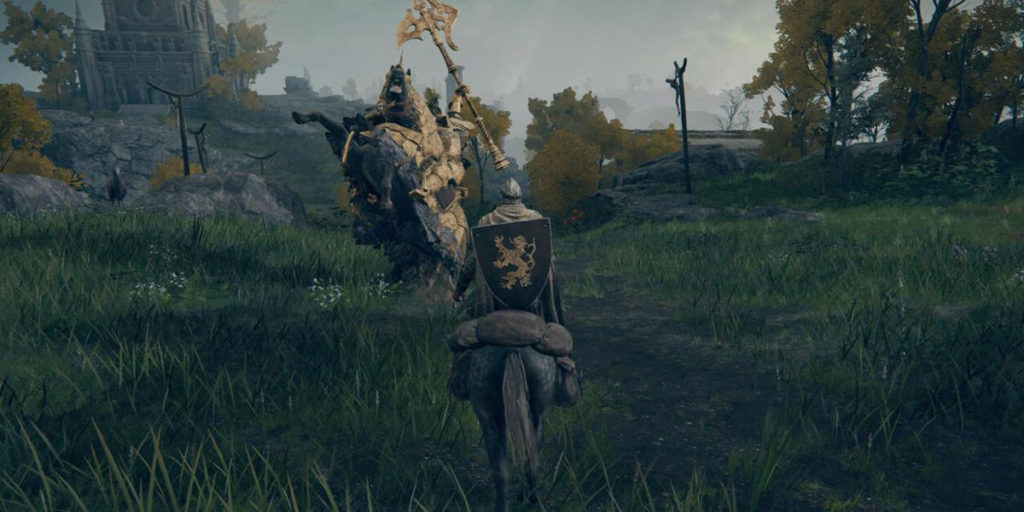 He is very difficult to beat thanks to his fast chain attacks and a solid HP bar. A great majority of players return to Tree Sentinel at a later point in the game. We recommend you do the same as the boss is very aggressive.

This scary doggy is one of the optional bosses in Limgrave. It waits for its next victim in the dungeon. Defeating the Burial Watchdog will reward you with a Noble Sorcerer Summon. 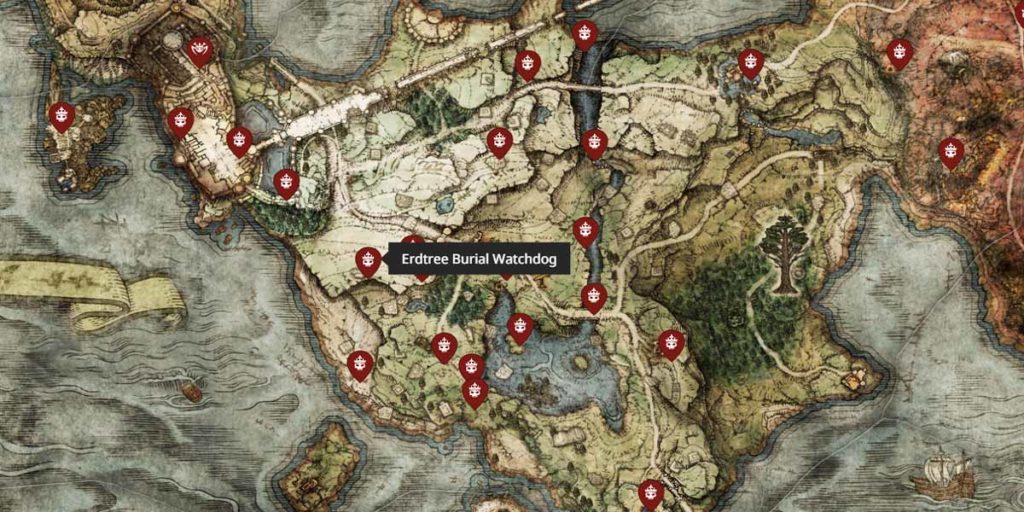 Summons are crucial when it comes to tackling difficult boss fights. So it is a good idea to beat this boss and obtain the summon. Here’s the location of this enemy.

Crucible Knight is one of the Evergaol bosses in Limgrave. The knight has fast and aggressive attacks, forcing you to move fast and giving you a small time for healing. 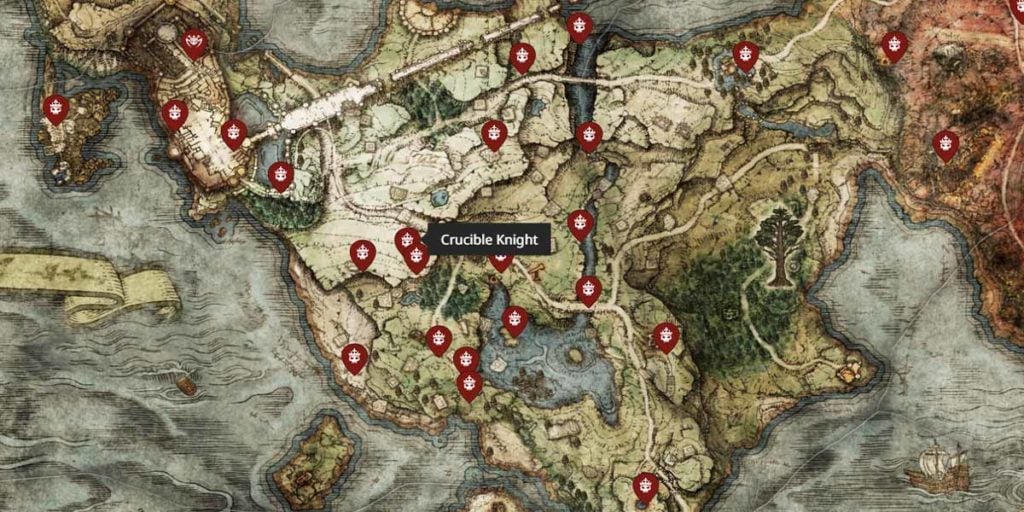 He drops Aspects of the Crucible: Tail, an incantation for those who fancy attacking enemies with a dragon tail. Here’s the location of the Crucible Knight.

Ulcerated Tree Spirit is one of the recurring bosses in the game. You will fight this grotesque monster in various regions of the Lands Between. 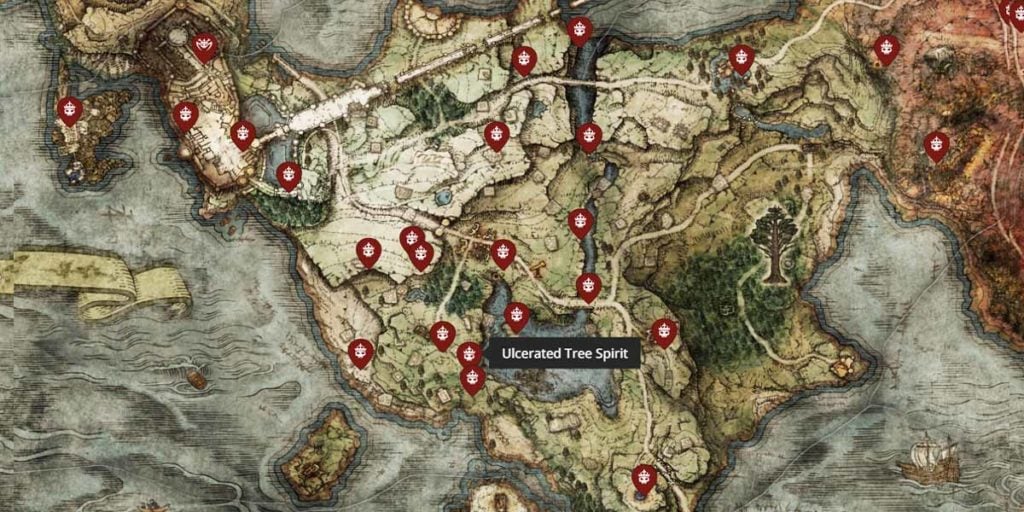 But this one is located in Fringefolk Hero’s Grave. It drops a Golden Seed when defeated, allowing you to increase the number of Flask of Crimson Tears.

You can find the Mad Pumpkin Head in Waypoint Ruins. While it does not drop anything useful, it defends the way leading to Sorceress Sellen. 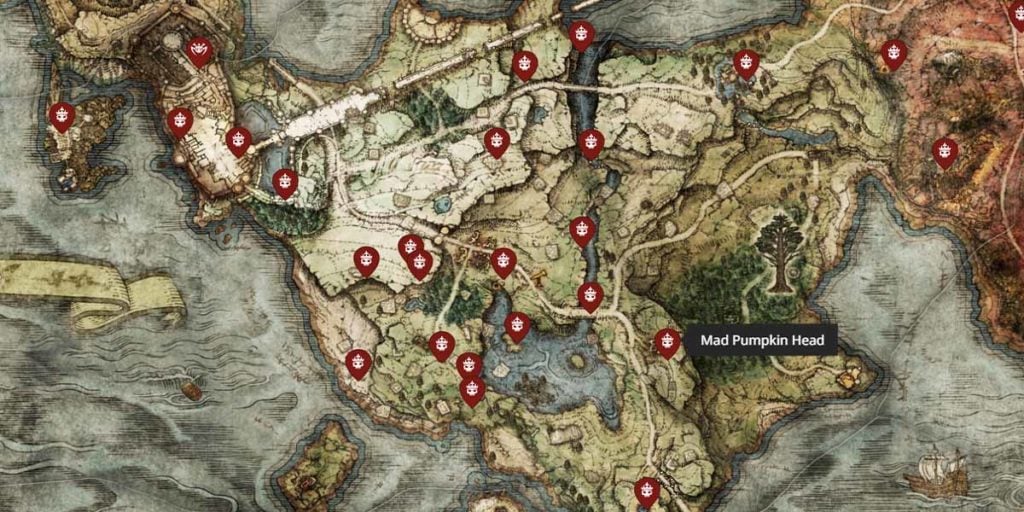 While it is optional to beat the Pumpkin Head, you will want to meet Sellen as she is a part of an important questline.

Bloodhound Knight Darriwil is another Evergaol boss in Limgrave. You can face this enemy during Blaidd’s questline. Though it is also possible to fight this boss without the wolven warrior. But it will be more difficult as Darriwil is a very agile boss with chain attacks. 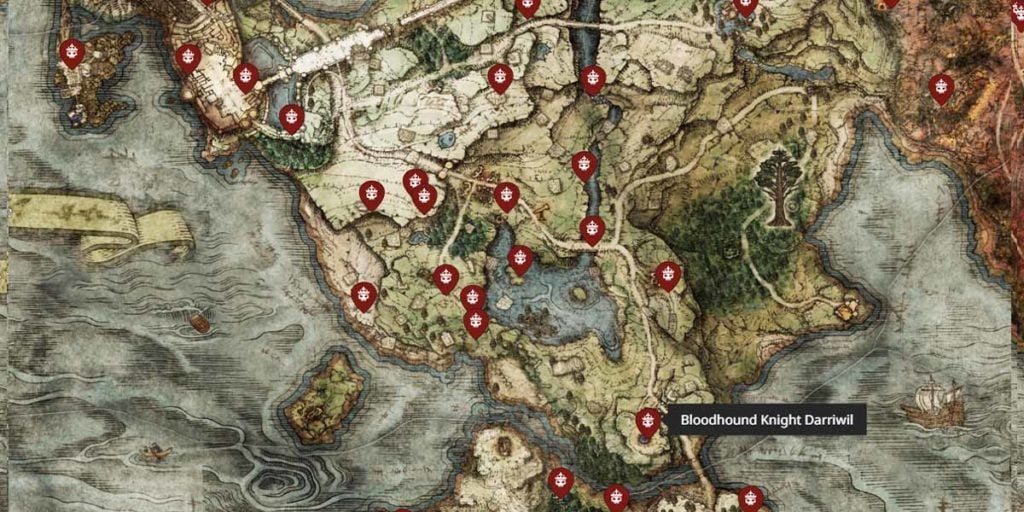 As one of the most recurring bosses in the game, Black Knife Assassin might get you a bit frustrated because of his unending chain of attacks. This cruel boss will be waiting for you in Deathtouched Catacombs.

To defeat the Demi-Human Chief, you will need to head to the western coast of Limgrave. The bosses wait for their victims in the Coastal Cave. 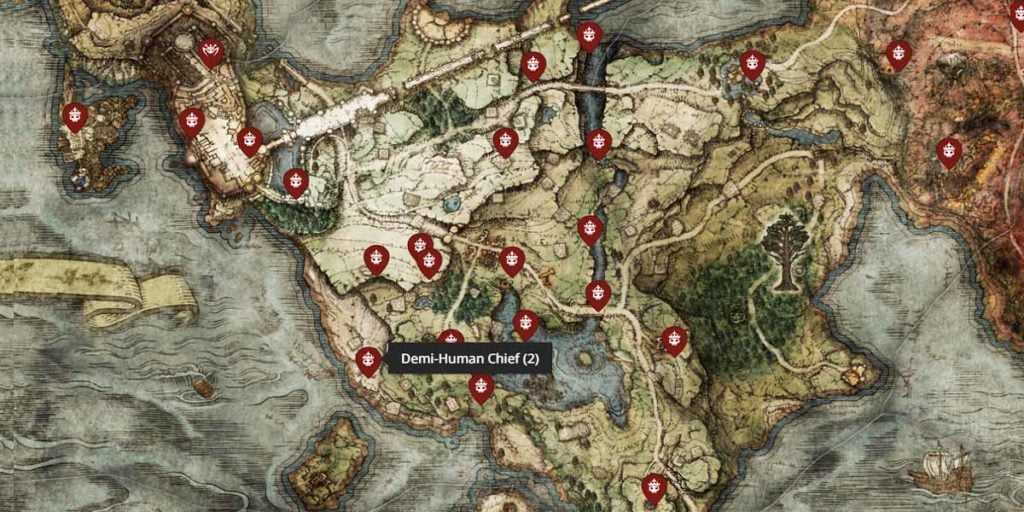 While it is a relatively easy boss fight, these two enemies drop items that hold significant value. And those are Tailoring Tools and Sewing Needle.

The mighty dragon Agheel flies above the lake in Limgrave. Do note that it does not simply wait there. The moment you walk into the lake, Agheel will dive into the waters, bursting solid damage that might one-shot you. 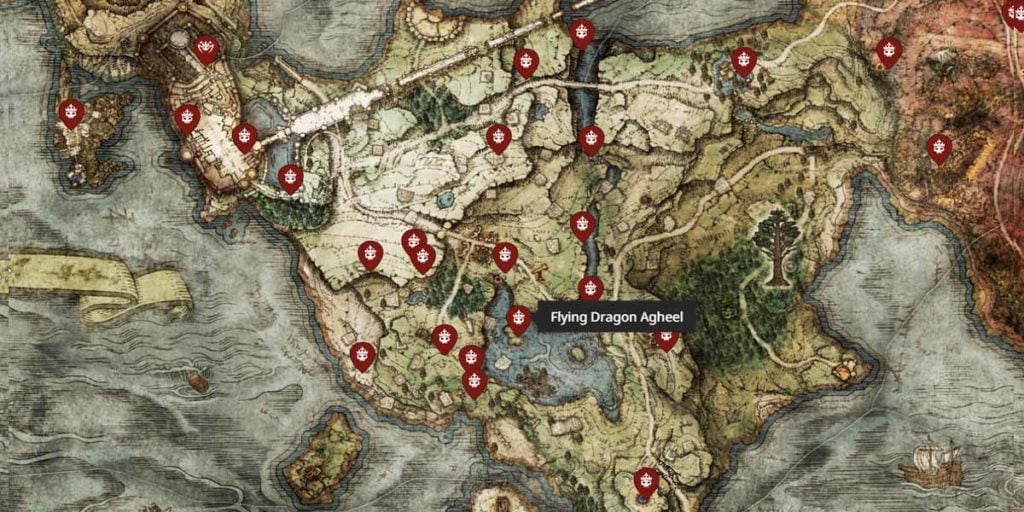 Defeating Agheel will reward you with a Dragon Heart.

Tibia Mariner is a boss that does not put much of a fight. Avoiding his summons should be enough as his attack pattern is pretty shallow. Tibia Mariner drops Deathroot and Skeletal Militiaman Ashes.

Facing the Beastman of Farum Azula will be one of the first boss fights in your journey. This grotesque creature lurks in Groveside Cave, which is near the path leading to the military camp. 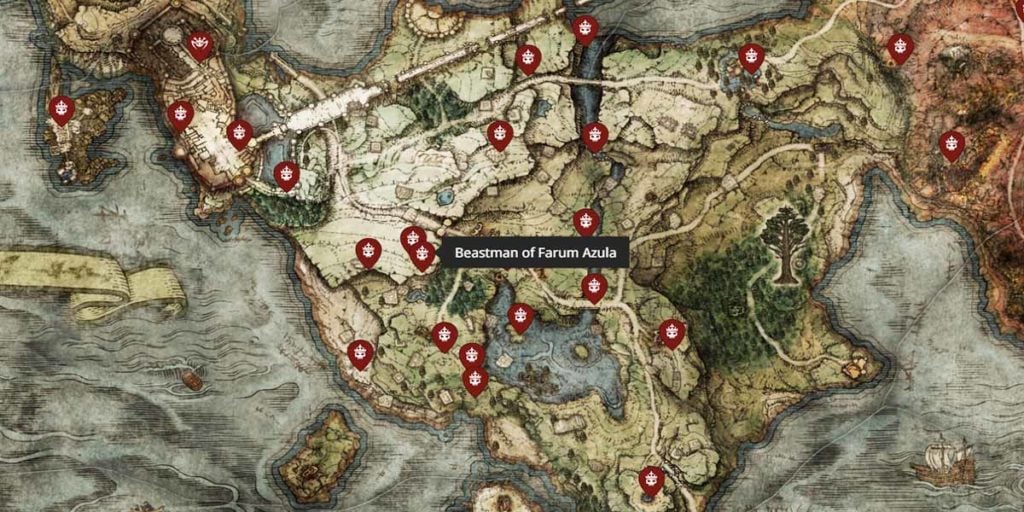 Grave Warden Duelist is another catacombs boss in Limgrave. This gladiator-looking brute can deal solid damage. Provided that you are patient and hit a couple of R2s, defeating the Duelist should not be a difficult task. 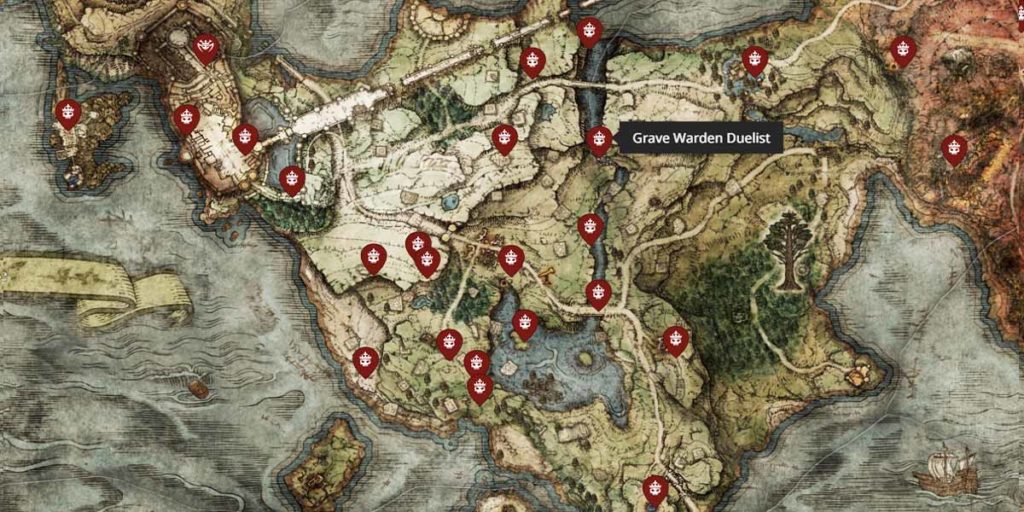 Henricus is actually one of the invaders that will teleport to your world in Limgrave. He will invade your world when you are around Stormhill. He is not very difficult to beat, though. And he drops Hammer Talisman and a Furlcalling Finger Remedy.

Anastasia is another invader that has a distinct hatred for the Tarnished. She will invade your world when you are getting closer to Caelid. The exact invasion spot of Anastasia is Smoldering Church, though. So be wary when you are near this church as this angry woman might butcher you with her massive knife.

Patches is one of the most iconic characters in Elden Ring. It is also among the bosses in Limgrave. 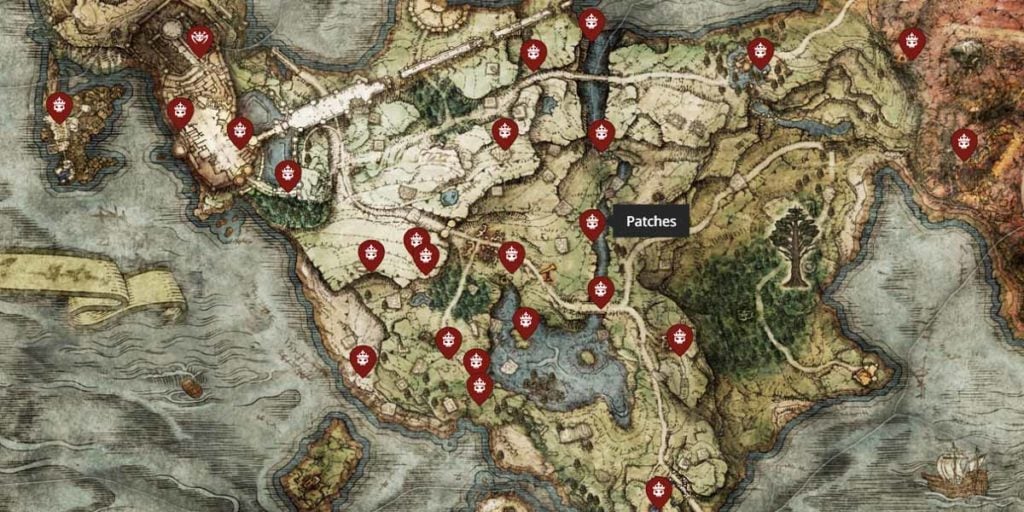 He is not a difficult boss as he asks for forgiveness after you defeat him. We recommend you to spare Patches as he becomes a merchant and can be summoned in a boss fight later in the game.

Nerijus is an agile warrior that will invade you on the stream near Murkwater Cave. While blocking his fast attacks is a bit difficult, you will have to hold on until a friendly warrior teleports to your world. After a few seconds, Yura, will enter the battle on your side and beat Bloody Finger Nerijus.

Nerijus drops a Furlcalling Finger Remedy and Reduvia, an amazing early game dagger that scales with STR and DEX.

Trolls are commonplace in this shattering realm. But the Stonedigger Troll is a bit different as he lurks around Limgrave Tunnels and carries a massive club. 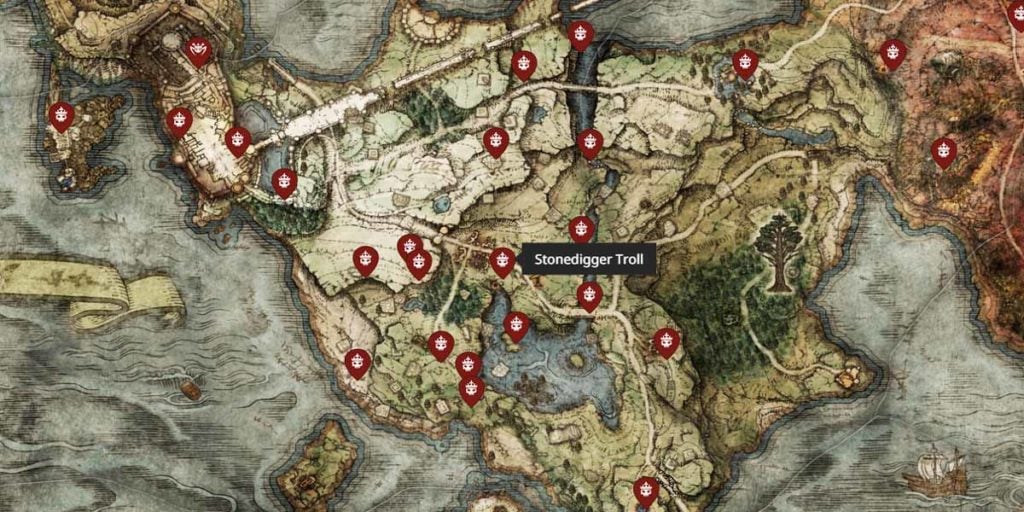 Those who like these colossal sticks in FromSoftware games will have to defeat him to get the Great Club.

You will have to fight these cavalries many times as you explore the other regions of the Lands Between. Almost every region has its own cavalry roaming around the land. 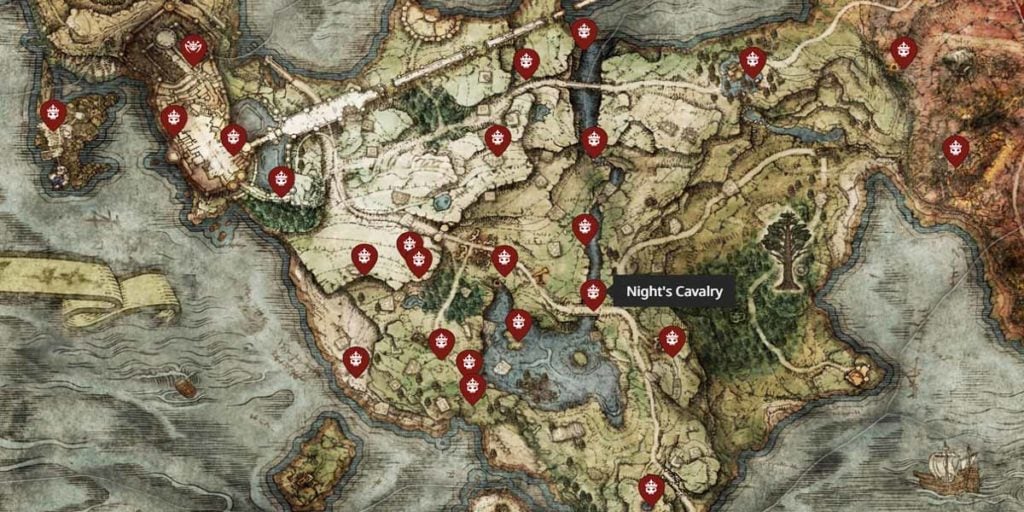 The one in Limgrave can be found on the bridge of Agheel Lake. Though he only appears at night and drops Ash of War: Repeating Thrust.

Margit, the Fell Omen is the first great boss you will face in your journey to become the Elden Lord. There is no doubt that he is the most difficult among all bosses in Limgrave. 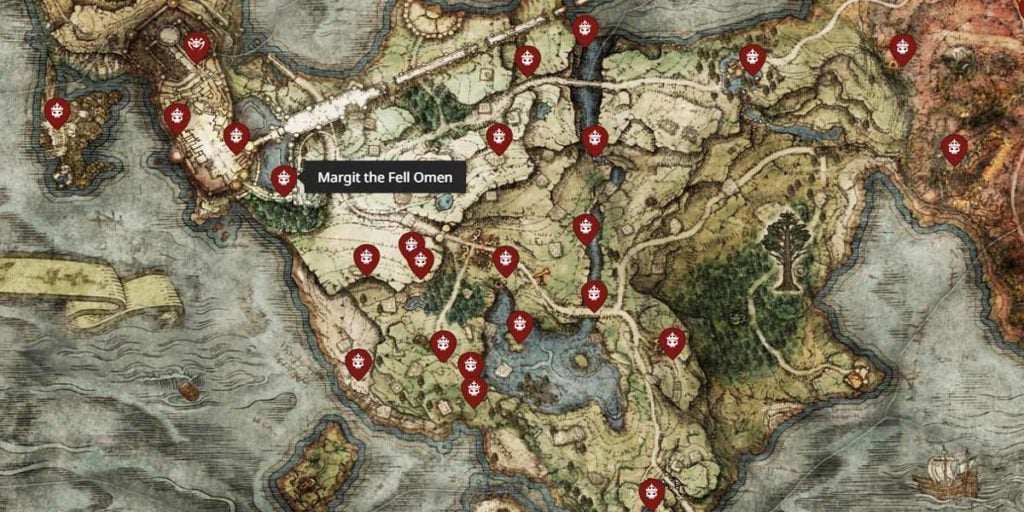 He drops a Talisman Pouch, allowing you to equip an extra talisman. Margit also yields 12,000 Runes.

Well, here are all the bosses in Limgrave. We compiled all the essential and optional fights in the first region of the Lands Between.