AI: The Somnium Files is a new mystery adventure game from one of the brightest minds of japan “Kotaro Uchikoshi”. He is known for his work on multiple visual novel games, including the Infinity and Zero Escape series. His writing style often incorporates elements of science fiction with various scientific and philosophical themes, and makes heavy use of plot twists to throw off the readers searching for the truth.

“AI” written in English – even in the Japanese title – is the work’s main theme and catch phrase, which translates to “Love” in Japanese. Ai is also the word for “true love” unlike the Japanese word “koi”, which can only be attributed to love for another person, and not an encompassing word describing all sorts of true love like Ai.

Ai can also mean “Eye” if we try to take its pronunciation at face value, which is something that has some implications inside the narrative itself, considering how the main detective is using his robotic eye partner, which also as an “AI – Artificial intelligence” inside of it to solve complicated closed rooms and resolve the mysteries surrounding the crime scenes.

All of these things can be observed not just in the title but inside the game itself “The Somnium Files”. The game also follows the same style as the previous game of the creator in how it utilizes scientific writing and concepts, and the idea of dividing the gameplay between the story telling part and the puzzle solving segment. On the other hand, the story this time is happening on a larger scale centered around tokyo in its entirety instead of a closed secluded location similar to the director’s previous narrative settings.

AI: The Somnium Files is now available on PS5, PS4, Xbox One, Xbox Series X/S (Tested), PC, and is playable for free for all Xbox Game Pass subscribers.

The stage of the work is in a slightly advanced version of our modern Tokyo in the near future, especially regarding the fields of Artificial Intelligence and Brain Research. Kaname Date – The Main detective – is investigating the serial murder case in which the killer piercers the left eye of all his victims before killing them. Knowing that the detective himself had lost his left eye and his memory along with it six years ago, he feels he it all related to this own personal dilemma.

In his investigation, date is accompanied by an artificial friend called Aiba (which is a word play on the Japanese word for buddy Aibo, also containing the word for love) in the form of a replacement left eye in his missing eye cavity. Aiba is technically connected to date’s consciousness and helps him in preforming many things conventional methods cannot do cannot do such as thermal scanning, remote communication, and interrogation of primary suspects through accessing their brain using a complicated system called the Somnium.

That’s where the other part of the title comes from, but we will focus on it later in the review. For now we will talk about the usual detective work, which acts very similar to a point and click adventure game, or maybe the recent “Detroit: Become Human”. You visit the places of concern, click on the things you find interesting, and have slight conversations with your Ai partner and other concerned parties about what could these clues really mean.

The difference from a general novel-style game here is that the main character’s POV can be easily adjusted and the crime scenes are expressed in 3D instead of static pictures. The character designs “By Yusuke Kozaki” are very charming and each character has various facial expressions to help us perceive the world of the game much more clearly. The dialogue contains many humous moments and is a bit light hearted in general compared to the heavy atmosphere of the previous games. 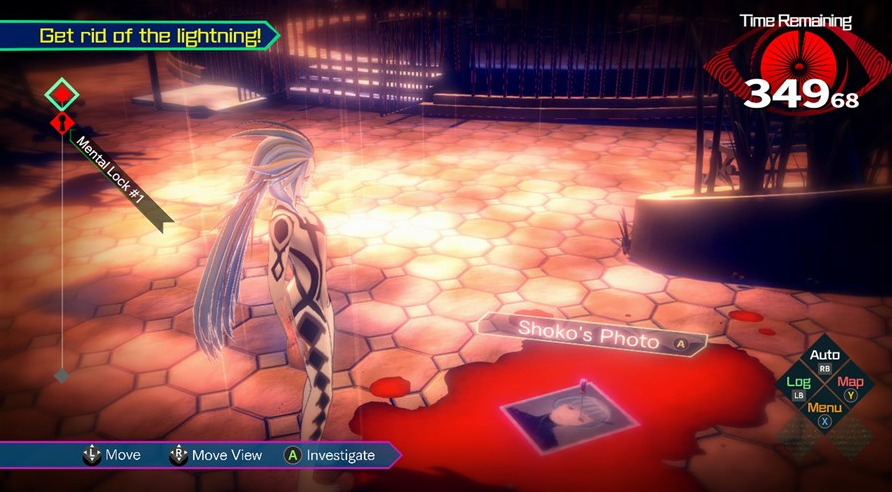 An orthodox investigation is not enough in the Somnium Files to find all the clues we need, even though we are able to use advanced methods such as Thermal and X-ray scanning, we could only guess who is responsible or related to the crime, but not enough clues to pin the crime on a specific person, and no one really wants to admit they are related to anything of that sort. That’s why we have to use a special device to enter the dreams of important witnesses and discover helpful clues we are unable to find by normal methods.

Inside the dream, players operate a humanoid version of the artificial intelligence Aiba, and go through a similar investigation part concerned with interacting with points of interest and discovering new clues. It is somewhat similar to usual closed escape mystery rooms but this time the solutions completely depart from the foundations of logic, which is expected because you are literally swimming in the sea of the unconsciousness. You may even discover new thoughts the accused person wasn’t even aware of in the depth of his soul.

There are many strange gimmicks that operate outside the boundaries of reality, and even defy some scientific concepts such as the rules of gravity. The dreams never look the same and their structure gets even more bizarre with each new suspect. It is worth noting though that there is a six-minute time limit on each dream dive, and preforming actions inside the dream takes considerable time, but thankfully there are many hints to the right actions you should take and a useful save system that lets you go back to any point in the puzzle without wasting too much time on having to repeat certain sequences.

The charm of AI: The Somnium Files

I am very glad that Xbox fans are finally getting the chance to experience Kotaro Uchikoshi’s excellent writing. He always takes care to describe everything surrounding the narrative to the outmost detail. If an episode of memory loss occurs, he goes deeper into the topic and defines the location of the injury, the brain lobes responsible for preserving our memories and how they impact our body. Also if a pseudonym is encountered you will always be informed on its origins and how its tied to Greek or Egyptian mythology or any other source inspiration.

Whenever I am playing one of Uchikoshi’s games I feel like i am always learning new things about various subjects such as physics, arithmetic, medicine, and even cosmology and fairy tales, and The Somnium Files is no exception. You can always trust that the characters in the game have something to say that matters, with its own share of projections on real life topics such as modern sciences and the inner workings of the human heart.

I have also fallen in love with the new approach to the idea of closed rooms, which is quite far from any realism. The game defines its own rules and the inner workings of each dream is totally unique. This always made me eager and enthusiastic to enter the next dream and try to grasp how everything is tied together using my own deductions and some trial and error.

Also regarding how much player input is needed, the puzzles in this game can be cleared without any external help. There is also a flow chart that is easy to understand and helps you go back to any point of the story and recognize how you can do things differently and access new routes and story sequences, and you will be able to finish the game in at least 25-30 hours.